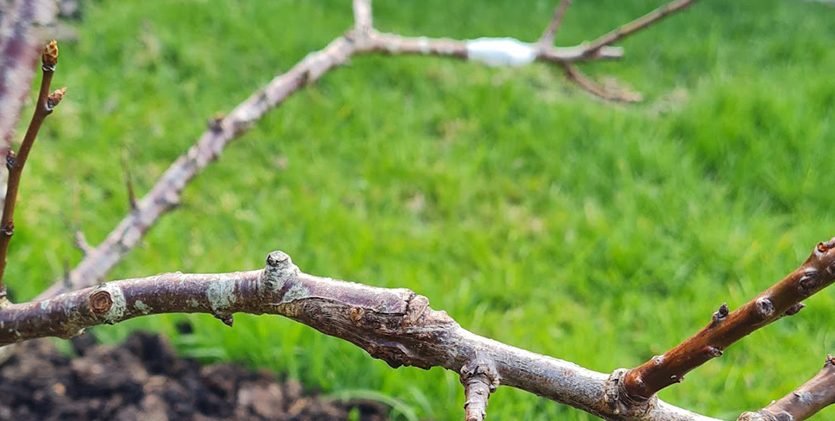 In September 2020, Caroline and Jane from Friends of the Farm (FoF) intended to run a grafting workshop for interested locals. They planned again for 2021. However, in both years, the August alert level changes got in the way. Regardless, Caroline and Jane forged ahead, collected scions from local heritage trees and went ahead with their own grafting sessions.

“In the past, Māngere Bridge was a popular area for market gardens as the soil was so rich and productive. In our area, there are old fruit trees nearing the end of their productive life. I think it’s important to preserve these old varieties for the future and grafting is one way of doing this”, Caroline noted.

In July 2020, Caroline visited several gardens in the area to take cuttings (scions) from productive fruit trees dating back to the early 1900s. “Our plan is to attach the scions to younger trees in the hope that it will still be possible to enjoy the fruit from these heritage varieties, even though the original tree may not survive,” she said.

Even though the planned workshops could not go ahead, Jane and Caroline were keen to progress. “We have an old apricot tree which used to produce beautiful, sweet fruit every summer. But the tree is dying and I thought it would be a shame to lose that variety,” said Jane. “My neighbour has grown baby apricot trees from our seeds and we planted one of those as a new tree.” However, trees grown from seed may not be as abundant as the original tree, so Jane decided to try grafting.

She took some young-growth cuttings from her old tree in July 2020, stored them with a damp paper towel in a plastic bag in her fridge until August, and waited for the FoF grafting workshop… which didn’t happen because of a lockdown.

Despite this, Jane and Caroline carried on with their mission, learning online and sharing their tips and triumphs.

Jane’s intention was to clone the older tree onto the new tree.

“My tree looked very strange with small plastic bags on it – as though I was trying to grow plastic fruit!” Jane quipped. “When the bags came off a few weeks later, the tree appeared to have twigs fastened to it with electrical tape. I think the neighbours wondered what I was up to.”

However, several months later when Jane carefully peeled off the plastic tape, she found that the cuttings had connected to the tree branch and were shooting out new growth. Success! Any fruit growing on the new branch would be exactly the same as the old tree.

Jane was so happy with the successful grafting, she has repeated the process this year.

“You can even have different varieties of fruit on a single tree,”, said Caroline. “Plant shops have ‘family’ apple trees, with branches of, perhaps, Gala, Cox, Golden Delicious.”

She suggested it was possible to do the same with citrus – orange, lemon, tangelo; or with stone fruit – peach, plum, nectarine.

Caroline thought this might be a good way to make use of the numerous grapefruit trees in the area. “Many people can’t eat grapefruit. Maybe one way to use that successful, but unwanted, tree is to graft a different citrus that your family would like to eat.”

Story by Robyn Martin for Friends of the Farm

Friends of the Farm will be holding more grafting workshops in the future. Keep an eye on our website for details of these events. In the meantime, you might like to watch our video, made during the 2020 lockdown.