Māngere Bridge: a sanctuary for shorebirds 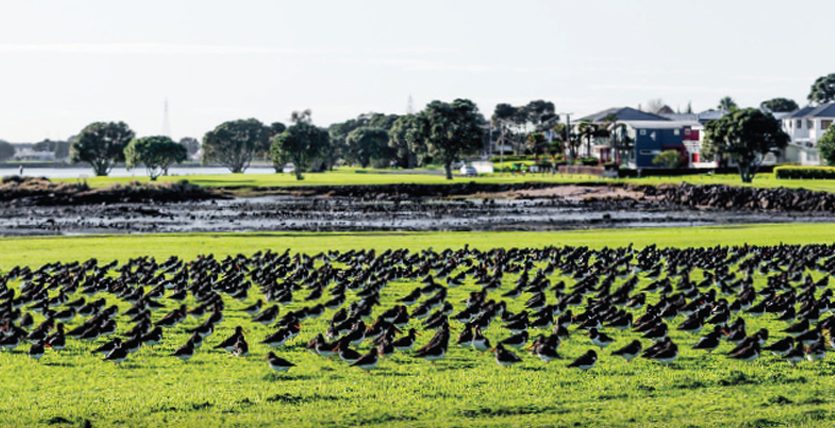 Māngere Bridge is located on the shores of the aptly named Manukau Harbour. In te reo Māori, ‘Manukau’ translates to ‘settling birds’.

With its shallow tidal flats, the harbour is a rich feeding ground for an impressive number of shorebirds.

Within Māngere Bridge itself, there are two fabulous locations that provide these birds with safe sanctuary: Ambury Regional Park and Kiwi Esplanade.

Ambury Park is one of the best locations in the country for shorebirds.

The safe roosting sites are a resting place for many species at different times of the year. In summer, the Park welcomes migrants from the northern hemisphere with kuaka/bar-tailed godwits from Alaska and red knots and ruddy turnstones from Siberia.

In winter, it becomes home to endemic migrants such as the wrybill plover and the banded dotterel which travel annually from the South to the North Island.

The walkway along Kiwi Esplanade is often home in winter to a combined flock of up to 5,000 South Island pied oystercatcher and the slightly larger variable oystercatcher.

The huge flock makes an impressive sight, and the birds seem to know that the Esplanade is generally a safe place for them to rest.

It’s best to view shorebirds at high tide, but please keep your distance. Our birds need to rest – especially just before or after their migrations. Please keep your dog on a lead and under control, and never deliberately disturb the birds.

To learn more about our shorebirds, join a guided walk at Ambury Park.

The walks take place four times a year to highlight the seasonal changes in our birdlife. They are run by Birds New Zealand/Te Kāhui Mātai Manu o Aotearoa, which fosters the study, knowledge and enjoyment of birds.

Watch for notices about upcoming walks on our Events Calendar.